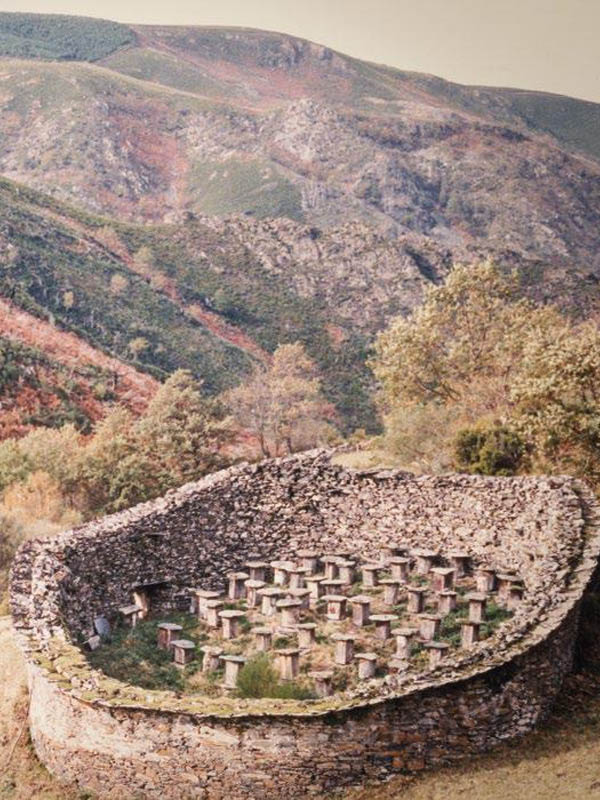 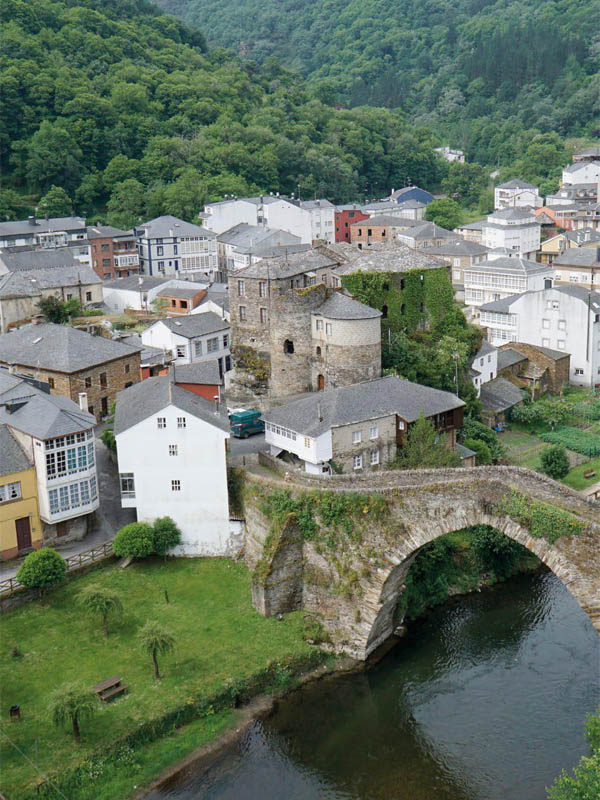 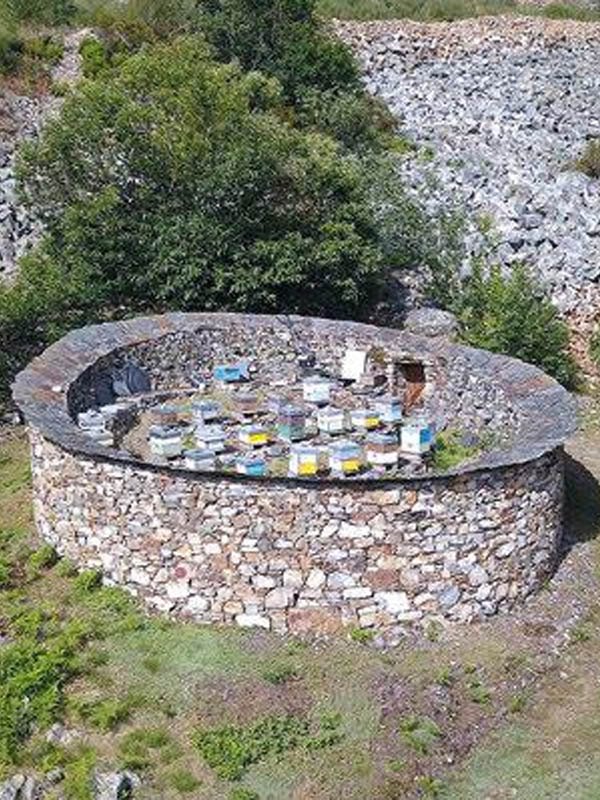 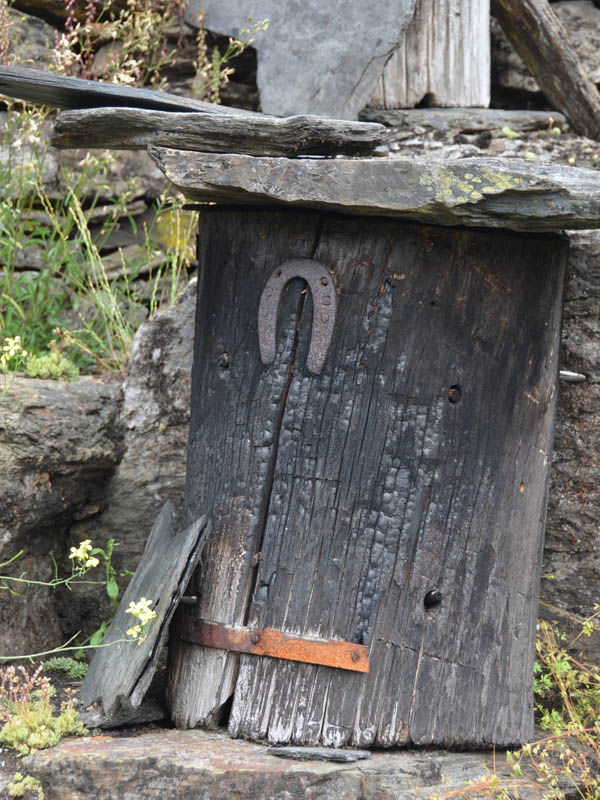 In the Serra dos Ancares, declared a biosphere reserve, we can find authentic monuments of Galician beekeeping, defensive alvarizas, with high, wide walls, to protect the hives from the bear. The hiking route along the Rao river valley (12 km), in the municipality of Navia de Suarna, together with another section by road (4 km), allows us to observe up to twenty alvarizas, some of them restored and with traditional and modern beehives. 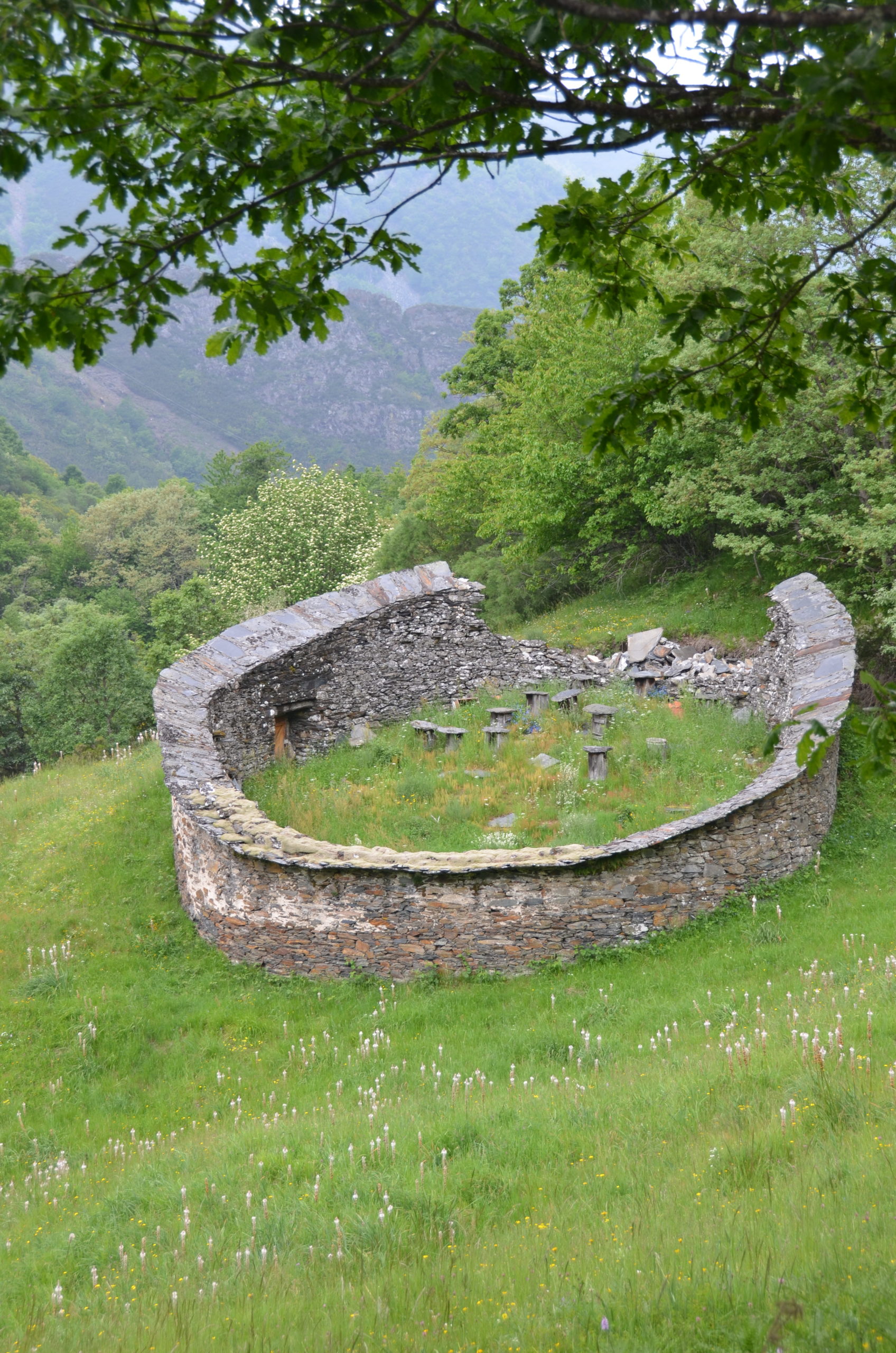 Os Ancares mountain range is, together with O Courel mountain range, Galicia’s vastest natural space, while also having been appointed as a Biosphere Reserve. It is formed by little valleys with their villages settled among 2,000-metre-high mountain tops. In the highest settlements, as in Piornedo village, stand out the ‘pallozas’, ancient thatched circular huts, which used to be cohabitation places for people and domestic animals. Being this one of the home territories of brown bears in Galicia, it was essential for beekeepers to find protection for their hives and therefore built the cortíns, the traditional apiaries of the area.

So as to discover Os Ancares traditional beekeeping, the perfect choice is the Ruta dos Cortíns. Along the way, we can approach several of these bee fortresses while we spot others in the opposite incline of the valley, being in total nearly twenty alvarizas (apiaries). Some are flawlessly preserved, with bees in their hives and even trobos, which is the name given in this area to ancient hives made with four planks or a hollow trunk.

The 18-kilometre-long route begins in the confluence of River Rao and River Navia, at about 300 metres above sea level, and ends in a cortín located further down Penas Murias, nearby Murias de Rao, located at 1,100 metres of altitude. Coming up from the mouth of River Rao, we start a continuous ascent for just over 2 kilometres, up to Embernallúas, an abandoned village albeit in a pretty decent state of preservation. From this position, the climb goes up to Prebello, located at about 3.3 kilometres. Starting at Prebello, there is a road available for cars. After Prebello, the route continues almost flat passing through Asar and Meda before getting to Rao. This stretch of 8.3 kilometres is of a low difficulty and is easily covered on foot. The last part of the route goes from Rao up to the Penas Murias cortín (about 7 kilometres) and, although the first part is almost even, it finishes in a steep climb. It passes through Robledo and Murias. In this stretch, we can visit the village of Coro, a restored ethnographic complex. 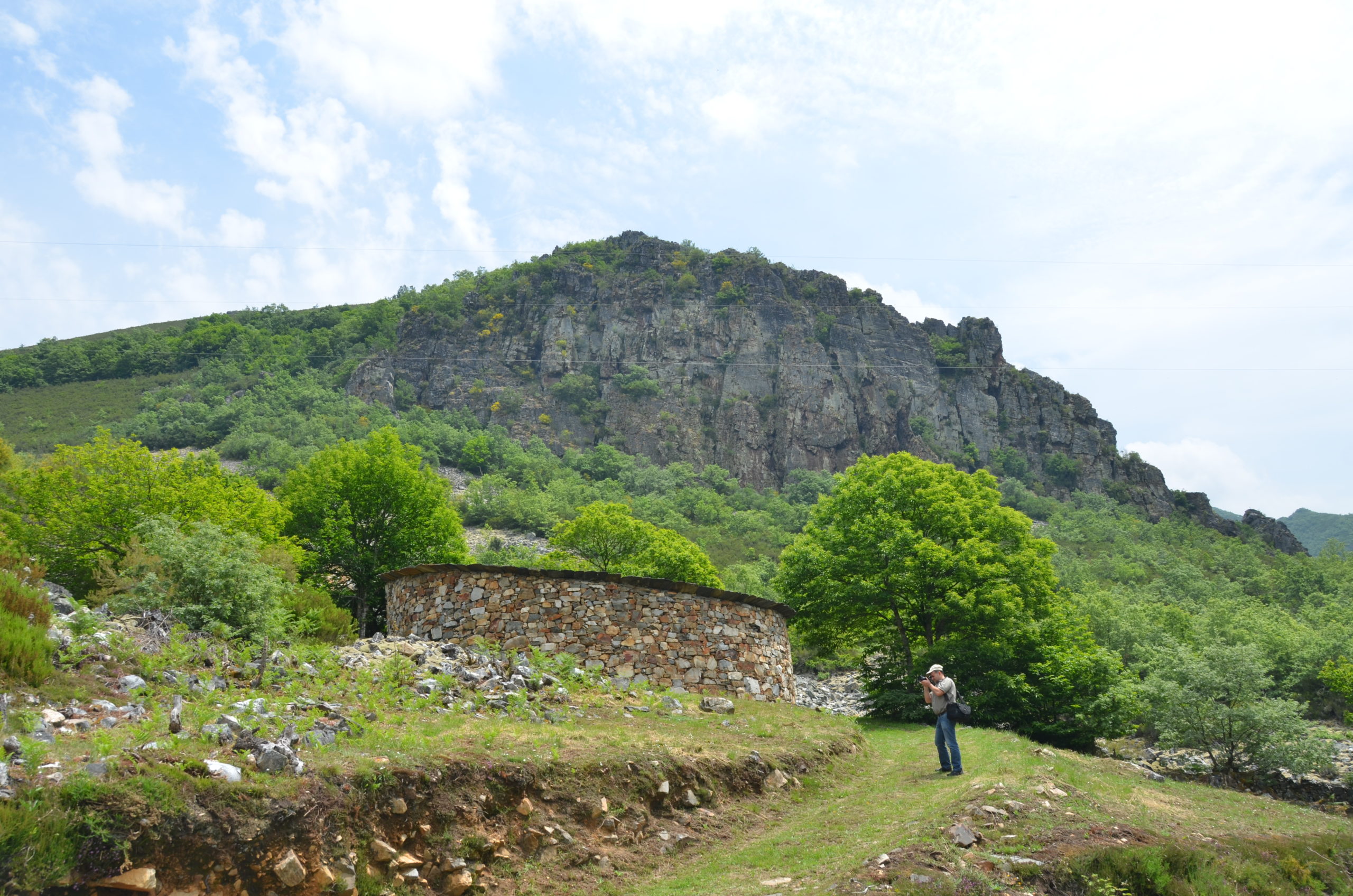 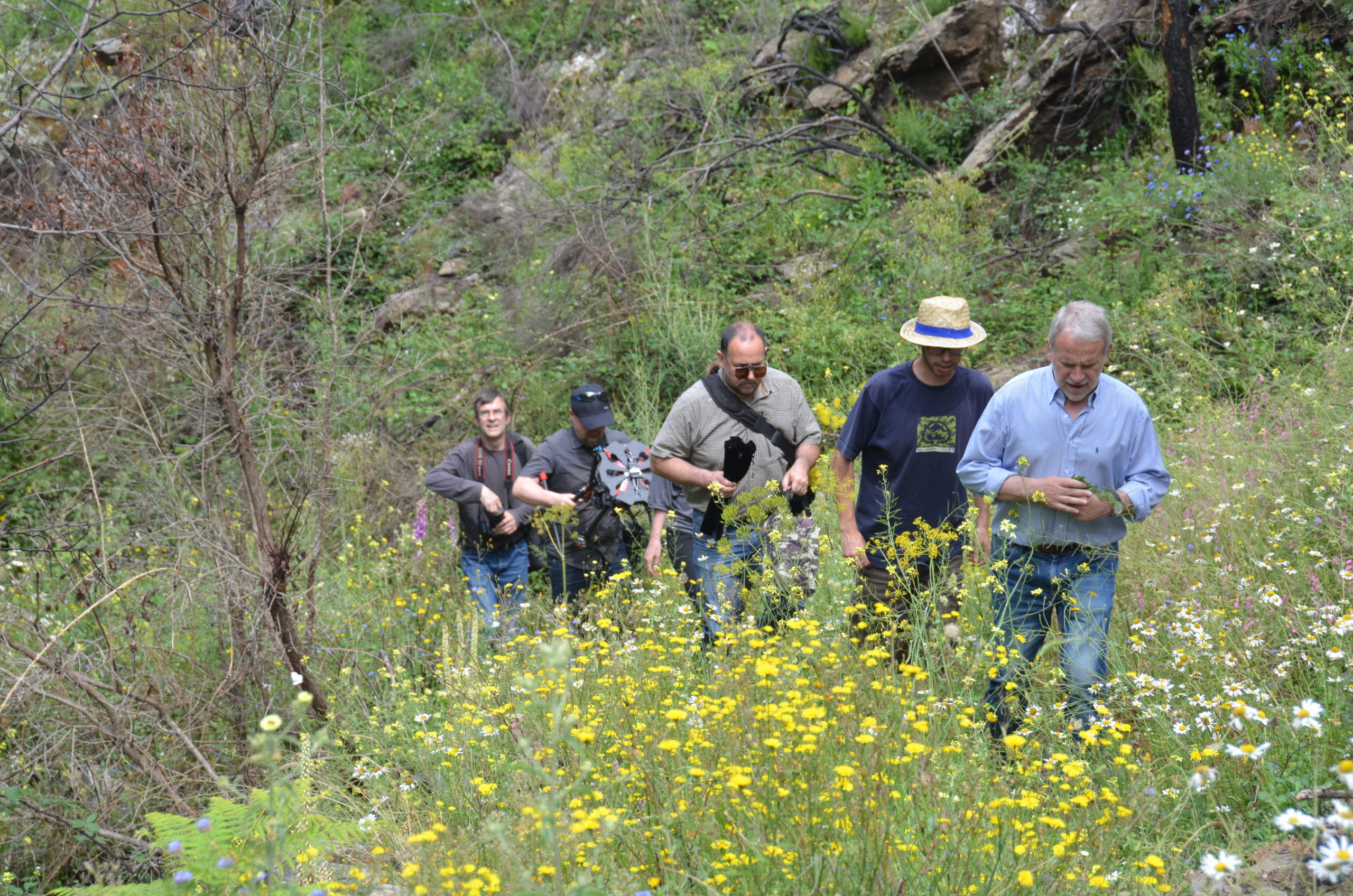 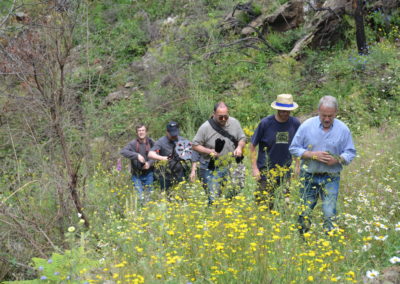 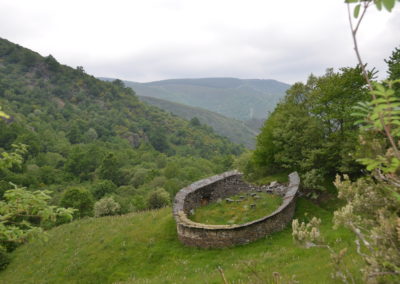 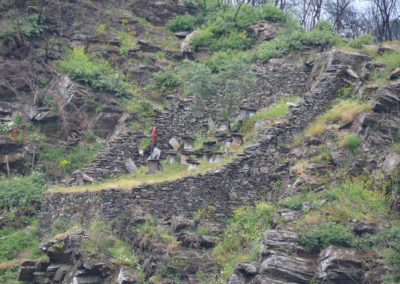 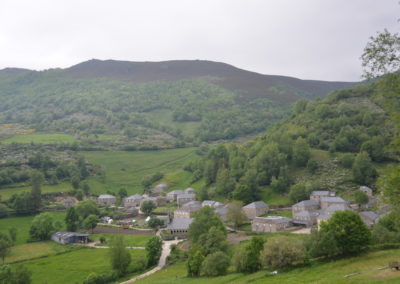 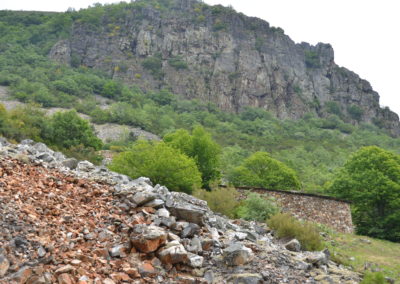